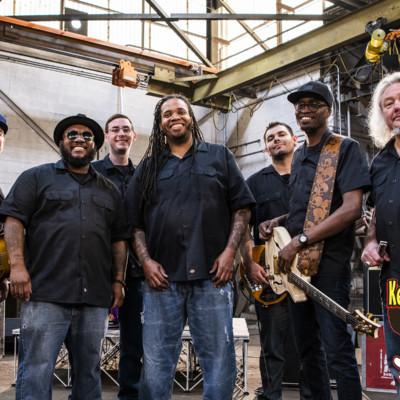 Their debut album, ‘Phat Blues Music’ remains one of the best selling releases in Mid-Atlantic region history. Kelly Bell, known as ‘The Bluesman’, is joined by vocalist Rahsaan “Wordslave” Eldridge, Ryan Fowler and Eric Robinson (guitar), Frankie Hernandez (bass), John Robert Buell (drums) and Dane Paul Russell (harmonica). The band are active in supporting our military, playing shows regularly for our troops. KBB believes in providing both physical and emotional support to our nation’s soldiers through Navy Entertainment. KBB doesn’t take any show or appearance for granted. Their goal remains to always put on the best show every night entertaining fans through their stage show, music, and audience interaction. The band can be found conversing with fans before and after shows. They make it a point to sign items and pose for photos with fans after each performance.