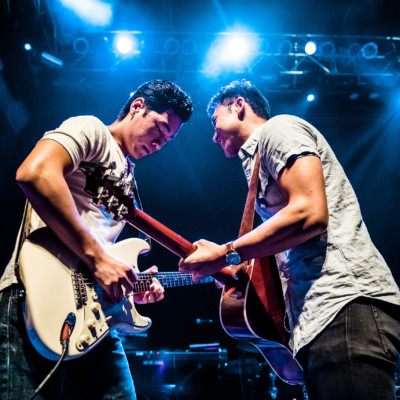 Washington, DC’s Skyline Hotel has always tried to embody one thing: escapism. What originated as a personal therapeutic project for singer Jon Lee to deal with his adversity soon became a set of songs his brother and lead guitarist/producer Jeff Lee could not ignore. From bedroom demos to local clubs, the brothers began to cultivate a modern blend of pop and rock that was as fun as it was vital. Expanding to include keyboardist Zack Be and drummer Jason Hayes, the band has become a full-blown pop/rock powerhouse. With two EPs under its belt and a constant gigging schedule that has found the band performing at Artscape, The 9:30 Club and The National Mall and sharing the stage with internationally touring acts such as Echo & the Bunnymen, Zella Day, Kitten, and Hippo Campus, this songwriting quartet is only just hitting its stride.