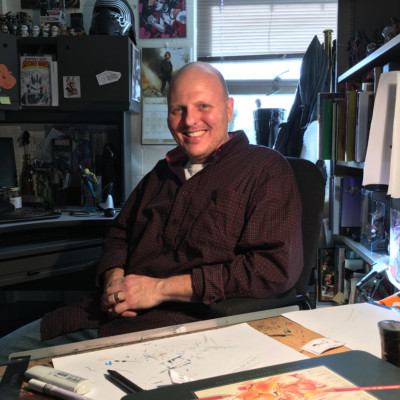 Brad Hudson has been an artist/instructor at the University of Maryland Eastern Shore for 19 years. He developed a Sequential Arts concentration that began in the Fall of 2009. Hudson is a prolific artist. He publishes his comics under the moniker of Coldstream Studios and has developed numerous characters including Draxx(with Chris Harrington), Rocket Girl, and Dark Crusader. In addition to his own titles, Hudson frequently contributes work other independent anthologies and illustrates other independent comics. In 2015, he illustrated issue #1 of Slowheart, written by UK scribe Adam Cheal. In May of 2015, Hudson attended the Wizard World Philadelphia Comic-Con. His work was seen by the Star Wars Brand Manager from Topps Trading cards. To date, he has produced over 3,000 Star Wars sketchcards to be distributed internationally. In addition to Star Wars, Hudson also does illustrations for other Topps licenses including AMC’s The Walking Dead, Stranger Things and Mars Attacks. Hudson has also been contracted by Upperdeck and Fleer to work on trading card series based on Agent Carter of SHEILD, Spider-Man, Guardians of The Galaxy, Thor Ragnarok and Avengers Infinity War under the Marvel Comics license. Hudson has also been invited to create sketch cards for Fox’s TV series, The X-Files. In the Fall of 2016, Hudson submitted a 4’x5’ oil painting of a First Order Tie Fighter Pilot to be considered for the art show at the Star Wars Celebration 2017. It was accepted and Hudson attended as guest in April 2017 with Acme Arts. Most recently, he has been contracted by Dynamite to work on some of their classic characters including Vampirella, Sheena Queen of the Jungle, Dejah Thoris and Red Sonja. Hudson continues to practice the art of printmaking specializing in lithography and relief printing. Hudson’s interests focus on the Pin-Ups of the 40s and 50s, classic illustration, and contemporary pattern, iconography and graffiti. He continues to exhibit locally, nationally and internationally and participates in numerous national comic book conventions with students from UMES.
“In the past 3 years, I’ve completed well over 3,000 full color illustrations. It’s taught me to be timely and flexible. I’ve explored a variety of materials and processes to adapt to the changing card stock and to keep my work fresh. Time management and scheduling have become major priorities!”