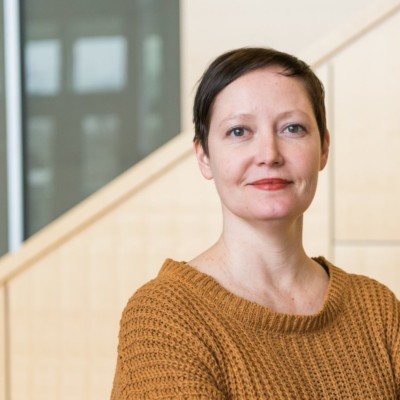 Nicole King is an associate professor and chair of the Department of American Studies, an affiliate professor in the Language, Literacy, and Culture doctoral program, and director of the Orser Center for the Study of Place, Community, and Culture at UMBC.

She received her PhD in American studies from the University of Maryland, College Park in 2008 and a MA in comparative literature and cultural studies from the University of New Mexico in 2001. Her research and teaching interests focus on issues of place, power, and economic development. King’s scholarship analyzes changes to the social and built environment during the rise of consumer culture in the twentieth century—such as the development of vernacular landscapes of tourism in the U.S. South and the decline of industrial neighborhoods in Baltimore. She is an editor of the book Baltimore Revisited: Stories of Inequality and Resistance in a U.S. City (Rutgers University Press, 2019) and the author of Sombreros and Motorcycles in a Newer South: The Politics of Aesthetics in South Carolina’s Tourism Industry (University Press of Mississippi, 2012). She co-founded the Baltimore Traces: Communities in Transition public humanities project where students work with local partners to research historic neighborhoods and complete oral history interviews focused on preserving the opinions of those who live and work in Baltimore. King’s research and teaching is based on the belief that looking and listening to a place can be a transformative act.