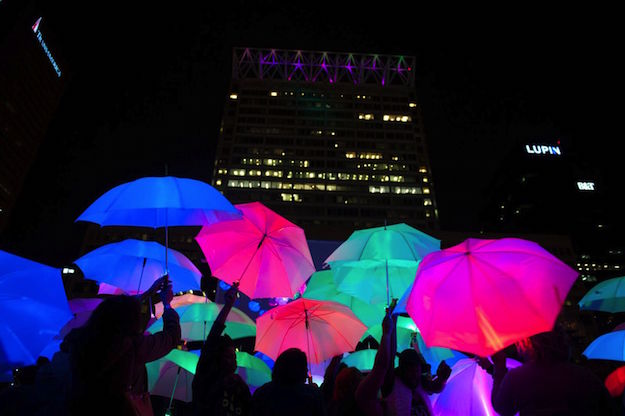 The Baltimore Office of Promotion & The Arts (BOPA) press release:

“The mission of Baltimore Office of Promotion & The Arts is to use the arts to make Baltimore a more vibrant city,” said Chief Executive Officer Donna Drew Sawyer of the Baltimore Office of Promotion & The Arts. “Our team of professionals works to fulfill that mission every day through visual, literary, culinary and performing arts. The BOPA team and our programming partners are creating one-of-a-kind experiences—making magic with imagination and turning what if into wow!”

Light City shines at night with 20 light art installations by artists from around the world including Baltimore, Washington, D.C., Oregon, France, Canada, Portugal, The Netherlands and New Zealand. The artworks include Masters of the Edifice by Ellis Marsalis III, a photographic project that displays in light and sound the city of Baltimore through large photographic reproductions in lightboxes of some of the many painted murals around the city; Loop by Ekumen, designed by Olivier Girouard, Jonathan Villeneuve, and Ottoblix in collaboration with Generique Design, Jérôme Roy and Thomas Ouellet Fredericks and produced by Quartier des Spectacles Partnership, a retro-futuristic machine that is a cross between a music box, a zoetrope and a railway handcar, that creates animated fairy-tales;Radiant Flux by Kevin Blackistone, an interactive piece that explores the many facets of light through an exploration of solar reflection on its faceted mirrored surface during the day and lunar moonbeams at night; and Waterlight Graffiti by Antonin Fourneau an interactive artwork in the form of a wall of thousands of LEDs that are illuminated when they come in contact with water. The artists were chosen by jury from more than 125 applications.

Entertainment abounds throughout the Baltimore Book Festival and Light City with performances by a variety of groups including Funsho (Top 40), Eman the Heartbreak (hip-hop), Jah Works (reggae), Outcalls (pop), Survival Society(alternative rock) and Suga Grits (funk/jam). Plus, festival goers can help discover new talent at Sound Off Live!, Baltimore’s premier “Battle of the Bands” event for emerging Maryland-based and regional artists on Wednesday, November 6 and Thursday, November 7 at the Hard Rock Cafe.

With the Neighborhood Lights program, the fun of Light City extends beyond the waterfront area with light art, literature, music, STEAM activities and delicious food in the communities. Partnering with the Enoch Pratt Free Library, highlights at the eight library branches include HASA’s Silent Disco in The Stacks, drone workshops with Global Air Media, and the light art installation Words That Light by artist Peter Quinn, which transforms the classic solar-powered road work message boards into short-burst poems that will surprise, delight and inspire people. In 2019, Neighborhood Lights is supported by T. Rowe Price and The Herbert Berman Foundation.

The 10-day celebration concludes with a Fireworks Finale on Sunday, November 10 at 9:45pm. Designed and choreographed to music by Fireworks by Grucci, the Inner Harbor basin lights up with a colorful and dynamic show.

More details will be announced throughout the summer and fall.  Stay connected online at www.brilliantbaltimore.com as well as www.baltimorebookfestival.org and www.lightcity.org or by following on Brilliant Baltimore on Facebook, Twitter and Instagram.