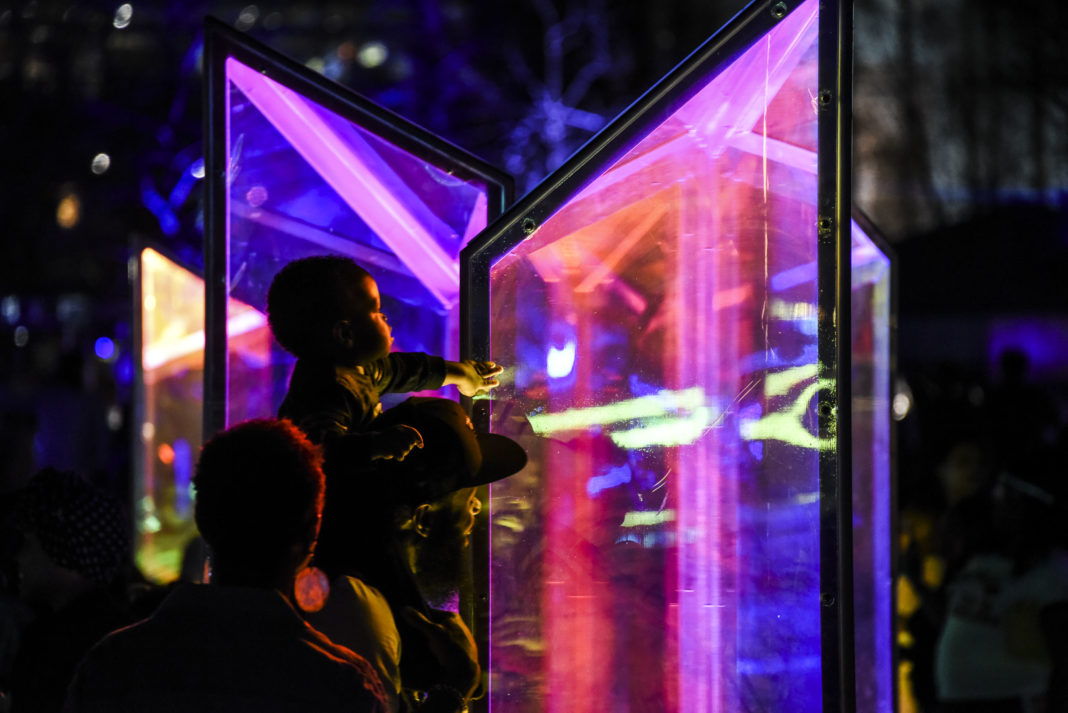 To bring together the Baltimore Book Festival and Light City, organizers are bringing light displays and programming to community hubs all across town: branches of the Enoch Pratt Free Library.

“Each of the Neighborhood Light parties will be unique to the community it’s in, with local performers and programming,” said Enoch Pratt president and CEO Heidi Daniel,

A couple of the 20 displays to be stationed at the Inner Harbor are getting in on the literary theme, too. For example “Loop,” a “cross between a music box, a zoetrope and a railway handcar,” creates animated fairy tales. And “Waterlight Graffiti” is an interactive wall of LED lights that encourages visitors to spray water or use a brush to express themselves–that is, write or draw.

Mostly, though, the two festivals will operate just as they have, but side-by-side, under the umbrella theme of Brilliant Baltimore.

Of the 20 pieces of light art on display from American and international artists, nine will be designed by Baltimoreans, said Kathy Hornig, festival director and COO of the Baltimore Office of Promotion & the Arts.

In addition the the Neighborhood Lights events at the Pratt, $5,000 grants are being offered to 10 groups to bring part of the festival to their corner of the city. The deadline to apply is July 29.

As for the celebration of the written word, there will be 10 stages and pavilions hosting various authors, poets, biographers, memoirists, romance writers and activists. Among the headliners: chef Carla Hall, author of “Carla Hall’s Soul Food: Everyday and Celebration”; Dave Cullen, who wrote about the Stoneman Douglas High School shooting and the movement it inspired; Nnedi Okorafor, author of “The Girl With the Magic Hands”; Ibram Kendi, author of the National Book Award winner “How to Be an Antiracist”; and local writers D. Watkins, Chris Wilson and Barbara Bourland.

Plus, there’s going to be a festival stage at this shindig with music from pop artist Funsho, indie-pop act Outcalls, indie group Super City, reggae band Jah Works, R&B group The Sweetwine Band and soul artist Joi Carter, as well as a battle of the bands called Sound Off Live! at the Hard Rock Cafe on Nov. 6-7.

Got all that? If not, there’s plenty more to explore at brilliantbaltimore.com.